While waiting for our life to return to normal and for work to return to the daily rhythm, I confess that in this period I have returned to doing what I once knew best: analysing data.

In fact, after uploading hundreds and hundreds of daily data on the trend of the epidemic in the main areas of interest (China, Italy, Switzerland, USA), I have developed a model for monitoring and forecasting the epidemiological curve (the FinLantern model).
Therefore, if it doesn’t bother you, I will be glad to share with you its outcomes and my comment (certainly independent and neutral) about the daily data that Italy publishes every day at 6:00 pm.

The choice of Italy is linked to the following main factors:

If I had started this “column” yesterday, when everyone said the March 16 th data was encouraging (drop in new cases, drop in currently positive cases, drop in deaths), I could have told you that, based on the FinLantern model, these were actually absolutely in line with a trend that remains exponential.
Et voilà! Indeed, as could have been expected, the record of positive cases (almost 3000 in a single day) was immediately registered yesterday 17 March.

Given that each model (including ours) is not able to accurately estimate the data of each day (but only a trend) and given that real data never follow a perfect curve (there may also be inaccuracies in data collection) and can therefore be very fluctuating around the same trend, I inform you that yesterday’s data (as of March 17th) would seem, according to FinLantern model, “good” and would confirm a slight slowdown in the rate of expansion of the epidemic in Italy (which, however, still remains exponential).

In fact, yesterday’s data tell us, on the basis of our model, that an index (called RO, which I could translate into “number of contagious contacts that each infected can cause on average”) has achieved for the first time a value equal to 2 (just to give you an idea, at the beginning of March the same RO index was higher than 4, that means that each infected person was able to infect at least 4 others).
Although 2 is better than 4, there is no need to get excited … in fact a RO = 2 means that, based on the approximately 26,000 people currently infected in Italy, these will result in about 52,000 new infections in a few days!!! … 52,000 people have already been infected and still don’t know!

Given that it is not the task of this study to say if the Italian health system will be able to withstand this impact, how many will be dead and how many will be cured … what I could instead estimate (only ESTIMATE!), with a degree of accuracy that can improve day by day, is: 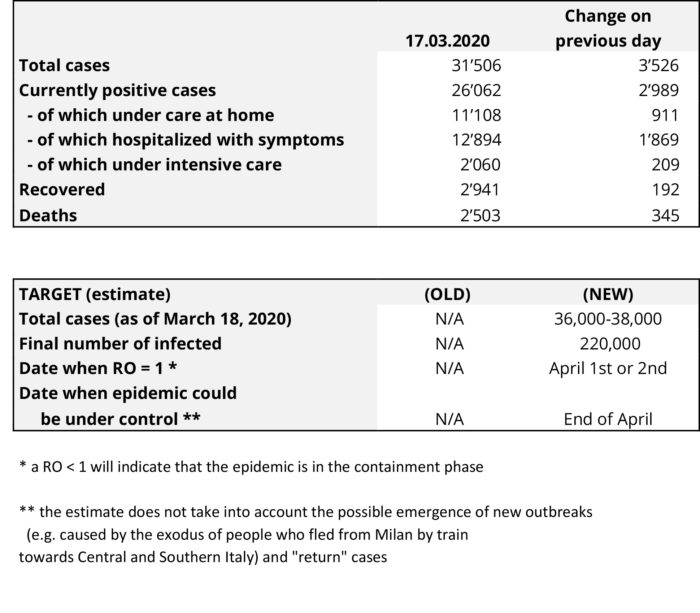 I still have many things to tell you about what the FinLantern model could provide as information in order to better understand what awaits us all in the coming days and how the financial markets could move and react to epidemiological data, but I have already been too long-winded.

If you want to follow me in this “Coronavirus Daily Comment“, I will therefore undertake to give you every day an update of the estimates of our forecast model and to add some useful information.

For example, in the next issue I will demonstrate that all containment models to spread the epidemic over a long period of time (and take care of all the infected) that the various states are trying to follow are based on a completely wrong hypothesis.

I am available to answer your possible curiosities at Riccardo@FinLantern.com
A good #IstayHome to all of you,