– Presentation of the main results indicated by the monitoring and forecasting model of the epidemic curve developed by FinLantern.
– Why are the containment models for spreading the epidemic over a long period of time (and taking care of all the infected) that the various States are trying to follow are based on a hypothesis that could be wrong
– Comment on yesterday’s data (March 18)
– Forecast on today’s data (March 19)
– Analysis of the possible impact of these data on the financial markets

Hoping that you are all well and that my comment yesterday was appreciated and useful, in this second issue I would like to explain to you why I believe that the various forecast models of the epidemiological curve that the various governments are following, in order to dilute over a very long period of time the effects of the epidemic (however detrimental to the economy), thus avoiding not to flood the hospitals and to be able to administer treatment to all the sick, could actually be based on incorrect hypotheses.

In fact, the intuition that I would like to share with you is, in a certain sense, borrowed from a concept that all those who have studied Economics should know very well and which is called the “Laffer curve”.

For those who have not studied Economics (or don’t remember it 🙂 ), I will say that the “Laffer curve” is a curve that relates the tax-rate (abscissa axis) to the tax revenue (ordinate axis). It was employed by Arthur Laffer, an economist from the University of Southern California (USA) to convince the then Republican candidate in the 1980 presidential election, Ronald Reagan, to decrease direct taxes.

In practice, Laffer pointed out that in extreme cases where the tax rate is 0% or is 100%, the tax revenue for the state will always be zero. If in the first case this is quite obvious, Laffer’s intuition was in having highlighted that in the second case (tax-rate = 100%), no one would have been incentivized to work and produce income, given that the whole income would be taken by the State itself. In this sense, the Laffer curve has the shape of an inverted U, indicating that there is certainly a point from which, in the face of a reduction in the tax rate, the revenue of the State could even increase (who knows when Italian Governments will decide to learn the theory of Laffer curve, ed).

The epidemiological version of the “Laffer curve” (if you want to call it “Esposito curve” I will be honored 🙂 ) instead relates the duration of an epidemic (abscissa axis) with the level of restrictions that are put in place by one State (ordinate axis).

Let’s assume the following two extreme cases and analyze them together:

The paradoxical intuition that I want to highlight is that in both these extreme cases there would probably be a very short course of the epidemic.

In the first case, in fact, all citizens would be immediately infected on the first lap, a good part of these would probably be asymptomatic, another part would get sick with symptoms and then recover and another part would die (note that the number of deaths for now it is not the goal of this analysis). In any case, the notorious Cornonavirus COVID-19 would no longer find individuals available to propagate, because either immune or dead, and therefore would become extinct after only one cycle.

In the second case, however, the absolute isolation of each individual citizen would have the effect of not infecting those who have never been positive, while those who bring out symptoms during the quarantine would be treated and kept in isolation until complete recovery … or his death. Again, the infamous Cornonavirus COVID-19 would have no chance of spreading and would therefore die out after only one cycle.

Given that these two extreme cases would certainly have profoundly different implications from each other in terms of the number of deaths, effects on the economy (note that, in this sense, it is not said that the exasperated “UK” model is worse than the ” Chinese “one), probability of “return” infections or induced by visitors from other countries (almost zero probability in the first case, since everyone will be immune), what I wanted instead to demonstrate is that the relationship between the duration of an epidemic and the level of restrictions put in place by a state should take the form of an inverted C.

This shape of the curve would reveal that beyond a certain limit (T2) the epidemic may have already run out, regardless of the attempts of governments to slow it down or speed it up.

On a positive note, the recovery of economic activity for the end of the restrictions and quarantines could therefore be anticipated (our model continues to indicate the end of April for Italy). 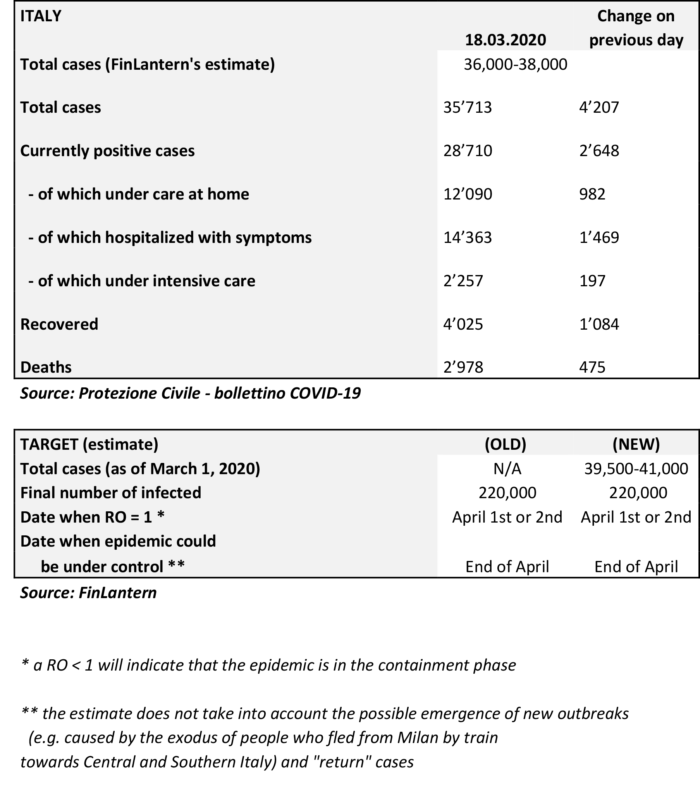 Good news, all things considered, from the data of the Italian Civil Protection of March 18th (if a good news could be considered the new record of people who died from the virus, equal to 475 in a single day in Italy).

In fact, the number of new positive cases (4,207) which also represents a new record, brings the number of total cases to 35,713, resulting to be slightly lower than the range we had expected (36,000-38,000), and could mark a slight decrease in the epidemic curve and a further slowdown in the RO index (= number of new infections for each infected person), which for the first time fell below 2.

The drop in the RO index and the lower than expected number of new total cases would demonstrate the success of the measures put in place by the Italian government to face the epidemic.

All this gives us hope, although it is absolutely early to let our guard down (everyone must continue to respect the quarantine, avoiding contact with others).

Prudentially, for now we prefer to keep our estimates unchanged (see table), waiting for a confirmation from today’s data (our estimate: total positive cases = 39.500 – 41.000).

In thanking you for the many emails you sent me after the release of the first issue of the “Coronavirus Daily Comment”, tomorrow I will be happy to answer some very interesting questions you have asked me.

Keep on writing and turning your curiosities to me!