– Why, according to the data of the weekend, Italy (and the rest of the world) risk losing the war against Coronavirus
– Presentation of the main results indicated by the monitoring and forecasting model of the epidemiological curve developed by FinLantern.
– Comment on the weekend data (20-21-22 March)
– Forecast on today’s data (March 23)
– Analysis of the possible impact of these data on the financial markets: NEGATIVE!
– (in tomorrow’s issue) Who could be the real winner after the Coronavirus crisis.

Saturday was the first day of spring (and yesterday was also my birthday!) … but we are not starting this new season absolutely in a good way. Today I had in fact promised myself to explain what data the Italian Civil Protection provides every day and how to interpret them, but the seriousness of the data that came out over the weekend deserves to be given priority to the analysis of the latter, given that I believe they can be a valid signal not only for Italy, but also for the rest of the world, to which Italy is acting as a track opener and guide.

Unfortunately, based on the FinLantern model that I developed, the data on Saturday and Sunday reveal not only that the number of infected people continues to grow (which is normal, given that we are still in the exponential phase of the infection), but above all that the Ro index stopped by its fundamental decline.

I remember that Ro (Basic Reproductive Rate) indicates how many people are infected on average by each infected person during his infectious period:

Considering fixed a series of factors that could affect the value of Ro (virulence rate, period of contagiousness, environment temperature, degree of pollution or existence of other vectors …), it follows that the main factors capable of having a direct influence on Ro are:

– The level of containment measures that a government has put in place;

– The predisposition of its citizens to follow the rules issued against the epidemic and to observe isolation and quarantine.

In practice Ro is an exceptional proxy for the behavior of a population under epidemic.

Today I will reveal to you that our model, which after all, as you saw last week, is giving us reliable indications on the development of the epidemic day by day, focuses precisely on the estimation of the Ro factor, which, after falling slowly but steadily since the first containment measures were taken by the Italian government (our estimates indicate that it has gone from a value of about 5-6 new infections per infected person to just under 2), in the last 5 days has practically stopped to decline and started to swing around the value of 1.825.

This value, on the basis of the current approximately 6,000 new infected people per day, is absolutely still too high. Just to be clear, in a “worst case scenario” in which Ro should still remain constant during the next 2 weeks (but hopefully not), we would find ourselves having at the end of next week about 12,500 new infected per day and 130,000 total cases , while these numbers would rise to 25,000 and 270,000 respectively in two weeks.

It would be the new Caporetto (most serious defeat in the history of the Italian army … like Waterloo for Napoleone!) of the National Health System and then we will not longer count the deaths.

In fact, we must consider that in this war (now this is really a war against the virus and I do not exclude that the opinion of some general could even be useful to the Government to establish a strategy) resources and time are scarce. This is something that both economists and generals know very well, but that politicians instead tend to forget, being used to finding resources with debt and facing problems by delaying their solutions: the exact opposite of what we need now!

To win this war, therefore, we must face a race against time, before that the resources, limited by definition (hospital beds, respirators for intubation, masks, sanitizers … but soon also medicines, oxygen cylinders, doctors and nurses … already become all our ammunition and our soldiers), are completely exhausted.

In fact, it is precisely from the analysis of the resources available that the other bad news arrives. From an analysis of the number of beds and intensive care units, we highlight that the excellent work done by the National Health Service and Italian Civil Protection has made it possible to increase the offer by around 1,400 places for the first and another 200 for the second every day, for a total of 1,600 extra beds every day. Too bad that today we are already travelling at a speed of over 4,500 new people who are currently positive per day (i.e. excluding the recovered and the dead from the calculation). Assuming that 50% of these do not need hospital treatment, it means that there is already a gap of at least 650 people who would need urgent medical attention and who do not find a place in the hospital instead.

I would like to be wrong, and besides the Italian Civil Protection will never admit it (my job, however, is precisely to draw answers from the naked and raw analysis of the data), but I am afraid it is not a coincidence the positive correlation, that has been created between this gap and the increase in the lethality rate, occurred in the last few days.

WELCOME, THEREFORE, TO THE NEW DECISION OF THE ITALIAN GOVERNMENT TO CLOSE ALL THE PRODUCTION AND SERVICE ACTIVITIES (EXCEPT THE ESSENTIAL ONES).

Unfortunately, this decision appears to be late. You know, so to speak, when the right decision was made in Wuhan to seal everything and everyone? When there were only 570 positive cases. It means that in Italy today we are delayed by 25 precious days and by more than 100 times the number of positive cases. Mine is not a criticism! No advanced economy with a democratic government could have taken the draconian decisions that were made in China with that timing: Italy is continuing to act as a track opener for everyone and is learning the lesson and, with its example, is teaching to the rest of western countries.

Unfortunately, the effects of this decision will begin to be seen in terms of numbers only in about ten days … but better late than never! 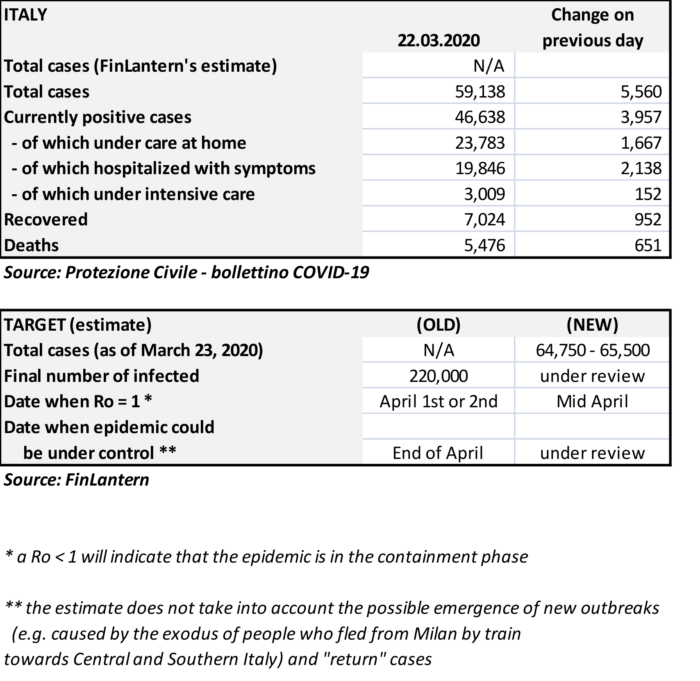 While the data on Friday 20 March were in line with our estimates (total number of cases 47,021 vs. an estimate of 46,000-47,500), the number of new cases announced on Saturday 20 March (+6557), only moderately compensated by those of on Sunday 22 March (+5560), practically sentenced that the reduction trend of Ro (the main indicator for us of the spread of the contagion among the population) stopped, or in any case suffered a sharp slowdown.

In fact, the value of Ro has been oscillating for 5 days between 1.89 and 1.75, placing itself only yesterday in the lower part of this range … we will see if the data of today (March 23) at 6:00 pm will tell us if this slowdown is confirmed, or if there may be a new downward trend.

In the absence of a new downward trend of Ro, we suspend for the moment the definition of the target relating to the number of final infected and that relating to the end of the epidemic, while unfortunately we have to move to mid-April the forecast of a Ro equal to 1 (previous estimate was in the first days of April), in line with the fact that the new containment measures launched by the government will begin to give results with about ten days of delay from their application.

I believe that the impact today of these data on the financial markets, although already partially discounted by the previous declines, can only be NEGATIVE, as well as the decision of the Italian government to freeze all non-essential activities. However, I remain convinced that this move is the right one to bring us better news in the next few days … but we are waiting for this to be confirmed by numbers.

FINAL REFLECTION: but is there really anyone in the OECD who still thinks that this year we will have a zero point something drop in GDP? I have the impression that here we are all losing whole percentage points every day!

Today in Lugano, but also in the rest of Europe, a sharp drop in temperatures is expected … but who cares! We must all stay home!
Continue to write to me and exchange your ideas with me … I am replying to everyone … slowly, slowly 🙂