– The solution to all the (economic-financial) problems of COVID-19: the “#TIMEWARP”
– Who could be the real winner after the Coronavirus crisis.
– Presentation of the main results indicated by the monitoring and forecasting model of the epidemiological curve developed by FinLantern.
– Comment on yesterday’s data (March 23)
– Forecast on today’s data (March 24)
– Analysis of the possible impact of the latest data on the financial markets: POSITIVE!

I have to apologize to you. You have really written me in many (today my daily comment, born almost by chance, was opened by over 18,000 of you) telling me not to be pessimistic, and that in the end we would certainly return to our previous lives.

Do not worry! I am also an optimist and I think exactly like you … but every now and then you have to say immediately and clearly what is not working, so you can immediately run for cover: what the Italian government, and some other European governments are doing, is finally going in the right direction. We await the results and we all continue to do our part: let’s stay at home!

WHO WILL BE THE POST-CORONAVIRUS WINNER?
Today I promised you that I would tell you who, in my opinion, if we don’t do something, risks being the real winner of this unreal situation that the whole world is experiencing.

Indeed, China, from which everything started, could even emerge strengthened by this crisis. In fact, China has been the one that has been able to better deal with the epidemic, taking very serious containment measures immediately, when the expansion was still in its initial phase (Wuhan was quarantined on January 22, when all over China there were only 570 cases officially … Italy only took similar measures last weekend when it had 59,000 cases).

The point is that the Western countries, governed by democracies in which China’s self-sufficient decisions are impossible to take quickly, will still be for several weeks (let’s hope only weeks) mired in dealing with the COVID-19 emergency, with the engines of their economies absolutely broken down.

In the meantime, to reassure their populations and their voters, they are competing to promise bailout plans of thousands of billions that I am really curious about how they will be financed (usual recourse to debt?) and with what procedures they will be distributed (complex bureaucracy?).

Not only that, always to reassure their voters, the Western governments are promising, as an additional tool to revive their economies, that they want to re-import production from China (forgetting that if entrepreneurs had gone to China it was to be able to withstand price competition , and not to make a nice trip to the other side of the world).

Finally, the poverty-effect induced by the collapse of financial markets and its impact on real economies will have to be taken into account. I remember that in 2008-2009 the collapse of the financial markets did not have important effects on the real economy, given that these were immediately rebounded: + 80% in six months. I am not sure that central banks today have enough arrows to cause another rally to stock exchanges all over the world.

In short, while China is already starting to reopen its factories and cities, the rest of the western world will still be stationary for a long time and it cannot be absolutely excluded that some factories or service companies will never even open. In the meantime, the whole world will need China even more.

To protect this completely unexpected competitive advantage, if I were Xi Jinping, I would be very careful to check for any epidemic outbreaks that may arise inside and, above all, to close the borders to avoid “return” contagions. Ooops! … sorry, that’s exactly what they are already doing in China, forcing those coming from other countries to stay in quarantine for 2 weeks at their own expense.

THE SOLUTION FOR WESTERN ECONOMIES: THE “#TIMEWARP”
Since I like unconventional “lateral” thinking, I would like to give you an anticipation of an idea that I am developing (so you can also tell me what you think).

This idea of mine is called “#TIMEWARP” (for those who are fans of the STAR TREK series, they will probably remember the warp drive 🙂 ).
It’s a really bizarre theory of mine … but that one of the HELICOPTER MONEY was too, and now this is becoming one of the possible ways out (also to create hyperinflation and burn all the debt accumulated in these years … read: BUY GOLD & CRYPTOCURRENCIES).

March and April are canceled!

What does this mean?

(you can share with me your ideas on Riccardo@FinLantern.com)

EFFECTS:
– FOR COMPANIES: #TIMEWARP would make it possible to put a brake on fixed costs. In this way, companies could keep their resources to start again at the right time. Conversely, the risk is that, when it starts again, many of them will have failed!
– FOR EMPLOYEES: it is true, they do not receive their salary for a couple of months, but at the end of the #TIMEWARP at least they will still have a company to work for. Otherwise, the risk is of being unemployed because their employers have gone bankrupt. In addition, we must also consider that they will have much less costs (no travel, no restaurants, no cinema, no gyms, no petrol for cars, no mortgages, no rent etc …). All that remains is to pay the costs for primary needs:

I believe that most families are able to resist with a negative saving for a couple of months in order to finance the cost for these primary needs. For those families instead who did not have previous savings to draw from, then a subsidy from the State should certainly be provided, but in this case it would be a very small amount for the public budget.

RESULT:
#TIMEWARP would allow us to restart our economies as if nothing had ever happened (March and April never existed!) … and preventing  governments by throwing huge sums of money at the market and by creating new debt!
On May 1st we would only have woken up from a bad nightmare 🙂 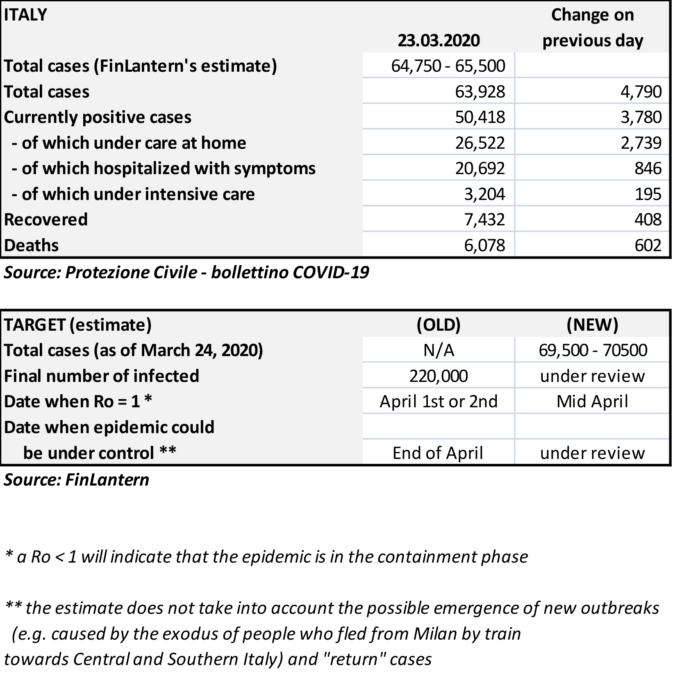 In fact there were “only” 4,790 new ones infected, down for the second day in a row. My concern is that there may be changes in how new cases are counted. Such changes would make the comparison of current data with past data more problematic and would distort the trajectories of the epidemiological curves, making to the various models (including ours) more difficult to predict.
My concern for data integrity stems from the words of a few days ago by Mr. Angelo Borrelli (Head of the Italian Civil Protection), who, to answer a question as to why the lethality rate in Italy was particularly high and growing (see also our interpretation in the Corona Daily News n.4 https://finlantern.com/corona-daily-comment-summary/), said that this was an effect not of the numerator, but of the denominator, as they were no longer able to keep up with everyone who presented themselves with symptoms and to swab him, since the analysis laboratories were already overloaded.

This means that the new positives could be many more than the official ones. Just to give you an example, in order to keep a lethality rate in line with the data of the previous day, at least 1,700 new cases should have been registered yesterday in addition, reaching around 6,500 !!!

What matters, for the purposes of our model, is that such a change in the calculation of new positive cases necessarily has an impact also on the value of Ro, leading to an underestimation of it. Resuming our simulation from before, we can say that the excellent data of yesterday made the Ro drop to 1.63 (before it was practically at 1.825 for 5 days), while making the correction of additional 1,700 new positives it would be 1.80. We will try better to understand in the next few days if we will have to consider this modification for our model.

Beyond all this, what is certain is that yesterday’s data should be received very well by the market and, therefore, their impact on the Milan stock exchange (and other European exchanges) should be POSITIVE!

If this new trend should be confirmed, in addition to the effects of the latest restrictions launched by the Italian government, which should begin to take effect within 7-10 days, an UPGRADE of our main target of a Ro equal to 1 from mid-April to early April cannot be excluded. We therefore await confirmation from the data for the next few days.

ESTIMATE FOR TODAY
Our expectation for today is a total number of new infected between 69.500 and 70.500.
The impact on the markets should be as follows:

In these days of forced enclosure I am rediscovering many small hobbies … and I am also cultivating new ones that I had never had time to really practice. Among these, I am learning to play the self-taught piano (I have a small electronic keyboard). I’m practicing to play “White Clouds” by Ludovico Einaudi. Here is my favorite version: https://www.youtube.com/watch?v=fEOJQawykD0

Continue to write to me and exchange your ideas with me and, if you like my Corona Daily, do not hesitate to share it with your friends and colleagues by registering them on http://community.finlantern.com/events/124-corona-daily-comment.