– The ranking of countries based on the rate of contagion
– Qualitative analysis of Germany, France, Spain, UK, Switzerland and USA
– Presentation of the main results indicated by the monitoring and forecasting model of the epidemiological curve developed by FinLantern.
– Comment on yesterday’s data (March 26th)
– Forecast on today’s data (March 2th)
– Analysis of the possible impact of the latest data on the Italian market: POSITIVE!

Yesterday, apart from a great interest in my “carbonara pasta” (a discussion was also born about the fact that in carbonara pasta there is, as I do, or not onion 🙂 ), I was very happy with your thanks for the classification of infections by number of inhabitants of each country.
However, this represents only a photograph at a given moment of the situation in a country and does not give any indication of the trend or the speed of the infection, information that I would like to try to give you today.

Therefore, I am attaching a table that shows our estimate of the Ro index as of 03/25/2020 of the various countries with more than 1,000 official positive cases, based on data from the ECDPC (European Center for Disease Prevention and Control). I remember, for those who are reading me for the first time, that Ro indicates the number of new infected people that each infected causes, and is therefore the main index that allows us to understand at what stage of the epidemic we are. 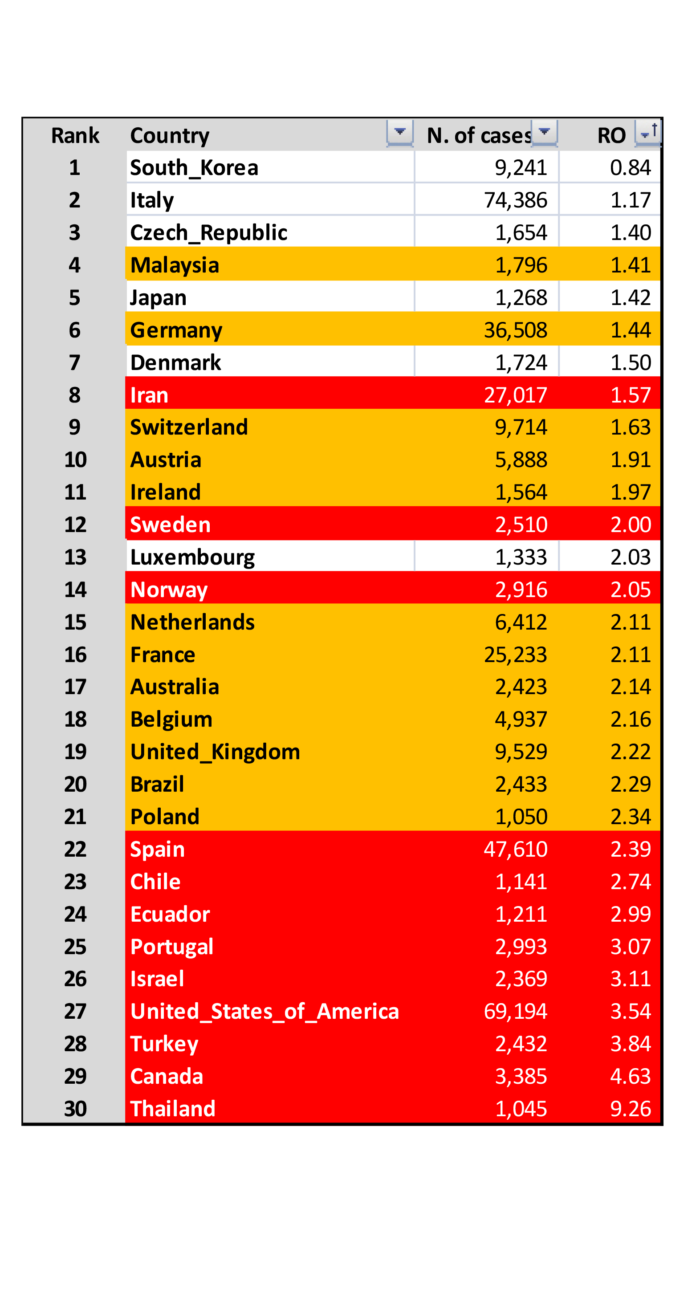 This ranking aims to highlight the most virtuous (top) countries that have put in place serious measures to contain the epidemic that is reflected in low Ro, from the less virtuous and which are characterized by being in an expansionary phase of contagion (high Ro).
In addition, I added colors as a quality factor to also indicate how the various countries are working to lower their Ro:

As seen from this table:
The most virtuous countries are South Korea and Italy, to which I would certainly add (although it is further back in the ranking) the small Luxembourg, if only for having made a very high number of buffers on its population. The great work of Italy in my opinion is also visible from the very linear trend that his Ro has had, a sign of having made many buffers, of having actively sought positive cases, of great transparency and consistency of the data provided, as well as have applied suitable containment measures. No other country seems to have succeeded in building such a linear trend for its Ro at the moment (see the Italian chart at the end of this report).

But let’s take a closer look at the graphs of some of the most important countries. 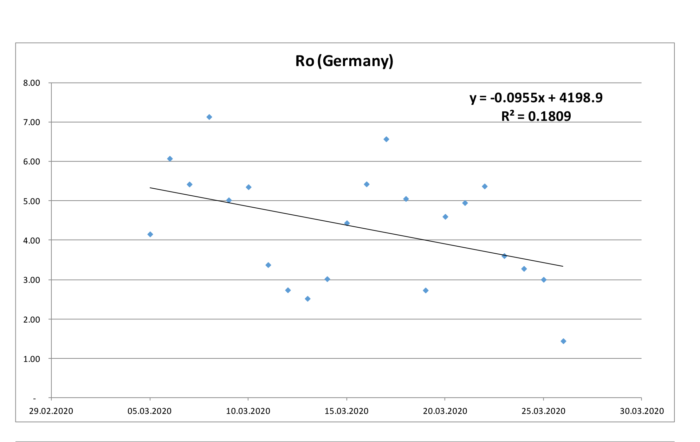 GERMANY (Rank 6): although the last Ro seems to be comforting and has earned Germany the sixth position in this ranking, qualitatively we believe that sufficient measures have not been taken in Germany to deal with the Coronavirus epidemic and that the last Ro may represent an outlayer, thus risking to be at a higher level in the next few days. The very low R2 indicates that a clear downward trend has not yet been created. REJECTED! 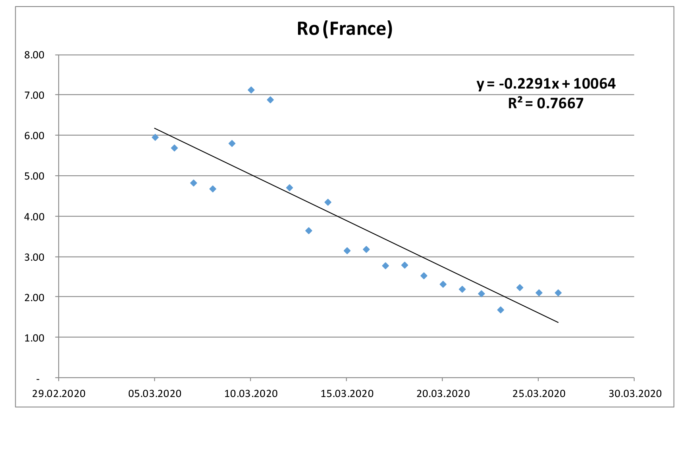 FRANCE (Rank 16): Although France lags behind in this ranking, it seems to be the nation that better than all the others has been able to imitate the path of reduction of Ro undertaken by Italy. The constancy with which Ro seems to decrease (confirmed by a high R2) would seem to confirm the seriousness of the measures taken. It remains to be seen why Ro has practically stopped on his descent for about a week: PASSED WITH RESERVE! 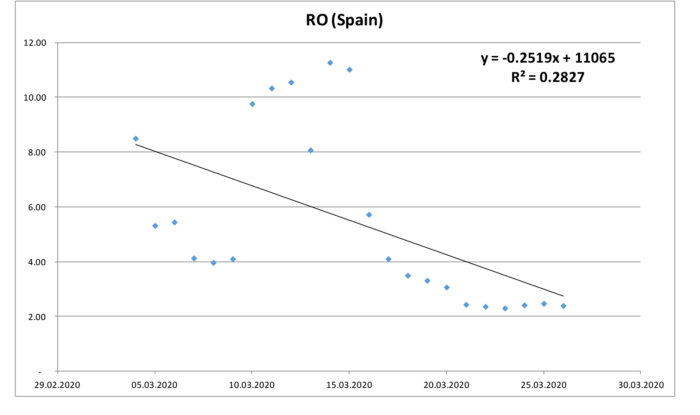 SPAIN (Rank 22): The highest level of infection in Europe (second, for now, only to that of Italy), a Ro still too high, together with a tendency to its reduction not yet well defined and even characterized by the fact that this index has remained constant for about a week, unfortunately make me predict that Spain is likely to be by far the most affected country in Europe by the Coronavirus: REJECTED! 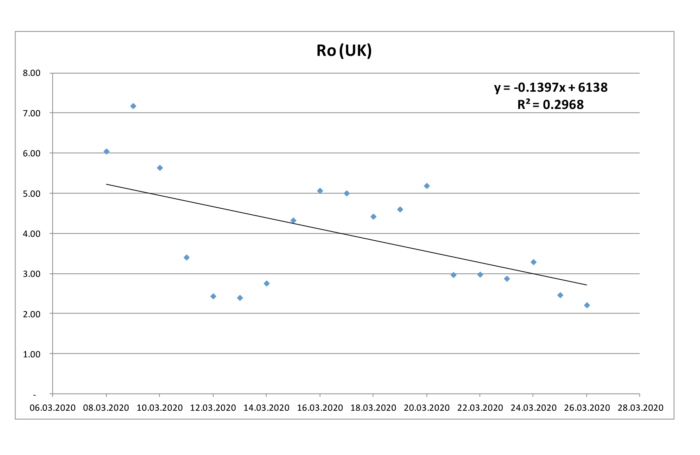 UNITED KINGDOM (Rank 19): the same considerations made for Spain are valid, with the only mitigating factors that the UK starts from a much lower level of contagion and that the back-front of Boris Johnson has probably yet to begin give its effects: REJECTED! 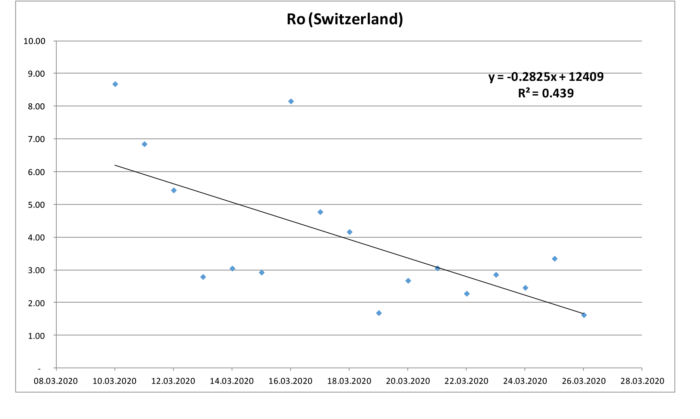 SWITZERLAND (Rank 9): The qualitative analysis of Switzerland turns out to be particularly articulated, given its political configuration as a Confederation, in which practically every canton thinks with its own head: the exact opposite of what it takes to manage an emergency like this (as China has shown us). Unfortunately, I fear that even the collection of data at the confederation level is not optimal (every now and then some canton forgets to report them or does so at different times from the others, and in any case with different criteria). It is no coincidence that Switzerland turns out to be the country in the world with the highest density of infections (among those with more than one million inhabitants). The decline in Ro is therefore not sufficiently well delineated and is still too characterized by data volatility. The only exception would be the Canton Ticino, the first canton to be affected by the virus, but also the only one that has adopted measures in line with those of Italy: REJECTED! 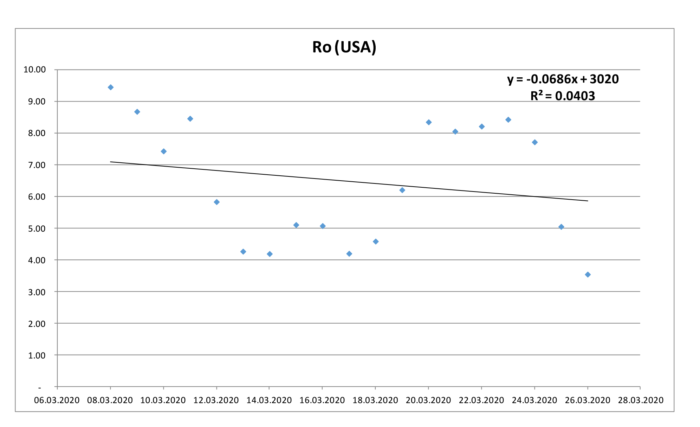 USA (Rank 27): If among my readers there is any supporter of the conspiracy theory that Coronavirus was widespread in CHINA by the CIA, we would then be facing the biggest boomerang in history! From what my data tell me, unfortunately I fear that the USA will be by far the most affected country in the world. The situation in the USA is characterized, in fact, by having today an already very high number of infected (officially 75,000), and this despite one of the lowest density of tampons applied to its population (which could suggest that in reality the positives are many more). In addition, the high density of large American cities could represent an additional amplifier. The Ro is higher than 3.5 and there is no tendency for its reduction at all: REJECTED! 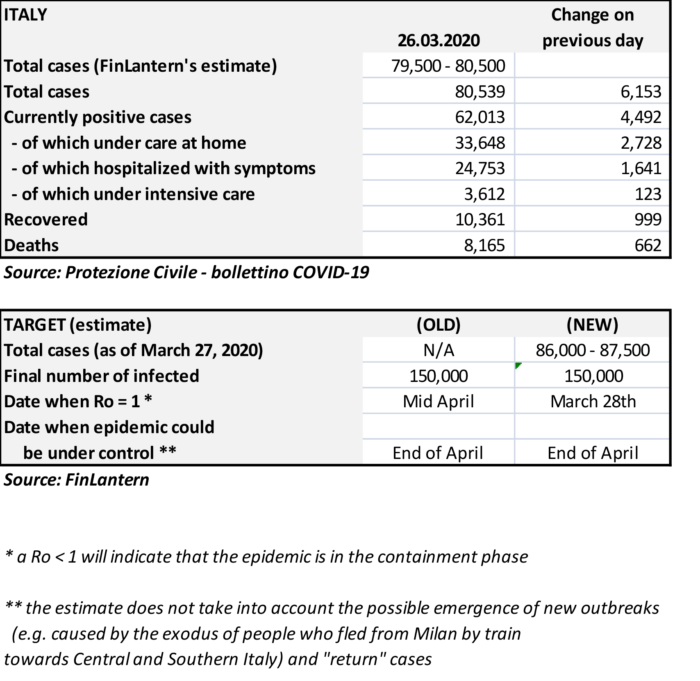 Yesterday’s data (26/03/2020) are in line with our expectations and must be judged POSITIVELY, because they confirm the continuous drop in the Ro index, now close to unity. 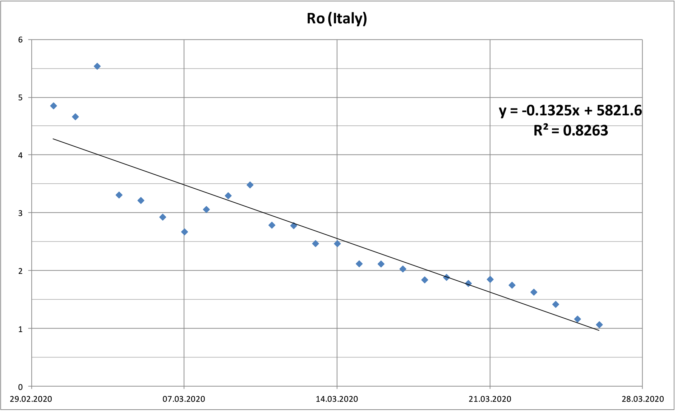 I BELIEVE THAT THESE DATA COULD CONFIRM THAT YESTERDAY (OR EVENTUALLY TODAY) ITALY SHOULD HAVE REACHED THE PEAK OF THE EPIDEMIC. AS A CONSEQUENCE, I BELIEVE THAT THE ITALIAN MARKET MAY BEGIN AN OVER-PERFORMANCE CYCLE COMPARED TO OTHER MARKETS.