In this number:
– Coronavirus: and if we had ALREADY REACHED THE HERD IMMUNITY?
– The ranking of nations that will emerge first from the epidemic crisis

I left you last time telling you that there were things that, following the analysis of numerous epidemiological curves and data from all over the world, seemed very strange to me about the behavior of this COVID-19 virus and its spread.

Let’s try to summarize what we know (or think we know) about this strange virus:

I hope you find the table below interesting, in which I highlighted the percentage of the OVER 65 population in some countries. The more a country is at the bottom of this ranking, the more it risks having negative consequences for its population. This would explain, at least in part, why Italy has been so badly affected and would explain why it is of fundamental importance to contain the contagion in Japan, where it would only be starting to spread now.

Ranking of nations based on the seniority of the population 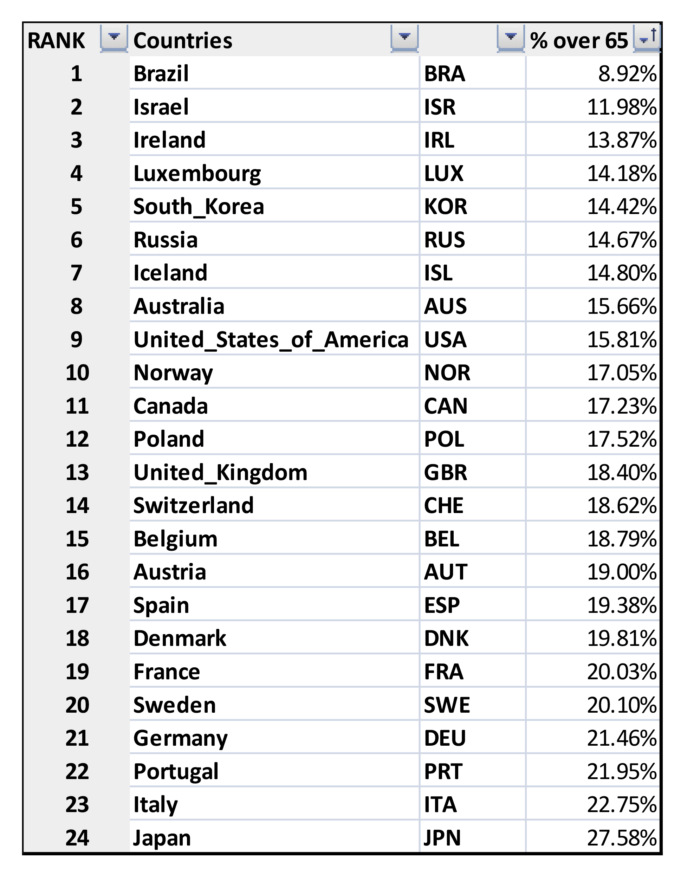 To this information I add some elements that I noticed from the analysis of the Ro of the various countries. I remember that Ro is the contagion factor, which indicates how many people on average can be infected by a single infected person during the evolution of his disease.

Furthermore, I remember that Ro was mainly used by us as a proxy for the behavior of the government and citizens of a nation to maintain isolation in order to stop the infection. However, it is also influenced by other factors, such as: the level of pollution (which could act as a carrier), the climate, the density of a population, the level of hygiene, etc.

At this point I would like to share with you some problems / doubts that have arisen in conducting my analyzes on this epidemic.

Statistics from scientific sources report of a Coronavirus contagion factor of about 3.5. This data is consistent with my data, but only when the epidemic has already reached a certain spread of contagion and that country has just started taking countermeasures (which will then gradually bring it down).

In fact, I observed that at the beginning of the spread of a contagion in any country, although it must be said that the data in this phase are usually very scarce and fragmented, the Ro is significantly higher than 3.5 … much higher!

If we think about it for a moment, it appears to be absolutely rational. Considering in fact one of the most subtle features of this virus, namely its long incubation period, but we really think that an infected person (and often unconsciously infected) could have infected only 3 or 4 others traveling for 14 days on a train full of commuters, or on a crowded bus, attending bars, restaurants and cinemas, staying in the office in an open-space, attending fairs or conferences for work, going to the stadium on Sunday, queuing at supermarkets, and then returning in the evening to home to his family, whose children will then go to school with the children of other families? … and this every day for 14 days of incubation?

In fact, based on the official data (ECDC – European Center for Disease Prevention and Control), at the beginning of each infection I found the following Ro:

If, moreover, we consider that our method of calculating the Ro is based on an average of 3 days over an incubation period of 6 days (median), the point values ​​could be even higher.

ISSUE n. 2  (which is the real contagion spread?)

Also, another thing that i don’t understand is the following: how is it possible that a virus that has brought the whole world to its knees, which, if not hindered, turns out to be highly contagious (so we just saw that it may not be unlikely to hypothesize an average Ro of 50) and with an incubation period of no less than 14 days in reality it has “officially” infected less than 1% of the population of a country … indeed excluding San Marino and Vatican City, it arrives in record cases 0.5%?
In this regard, see the table below:

Ranking of nations according to the spread of the infection 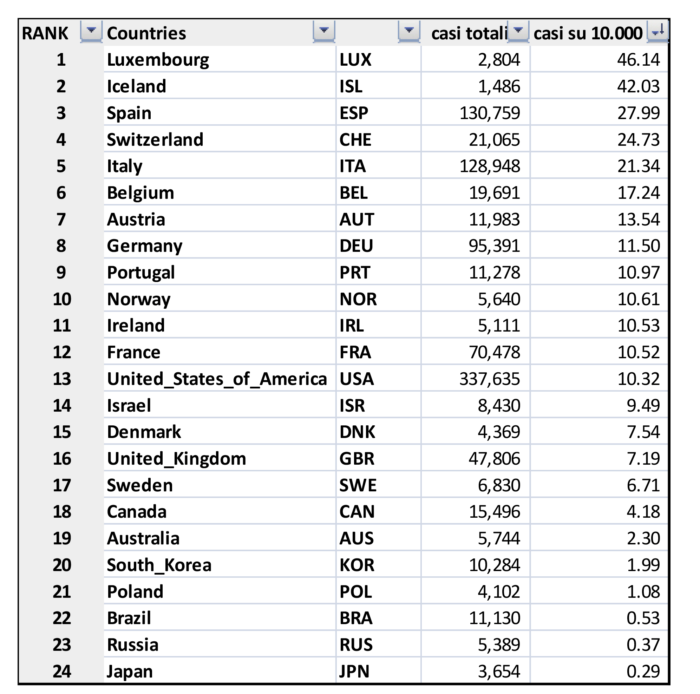 It is worth highlighting that the top positions of Luxembourg and Iceland derive from the fact that these countries have conducted a high number of tests, “more officially” highlighting positive cases compared to other countries where the infection could actually be “unofficially” more widespread. As for Japan, as I said before, it seems that the epidemic in that country has just started.

The third strange thing that I noticed in conducting my analyzes on the Ro of various countries is that the trend of this variable seemed to be, after all, independent of the type of policies adopted by that country, whether it adopted very restrictive measures (lockdown ) or less.

In this second hypothesis, I would in fact have expected significantly higher ROs and for a longer period of time which should have led to a greater spread of the infection.

Among the countries that have not embraced the lockdown policy, albeit by limiting the gatherings of people, we find:

Ranking of nations according to the contagion factor Ro 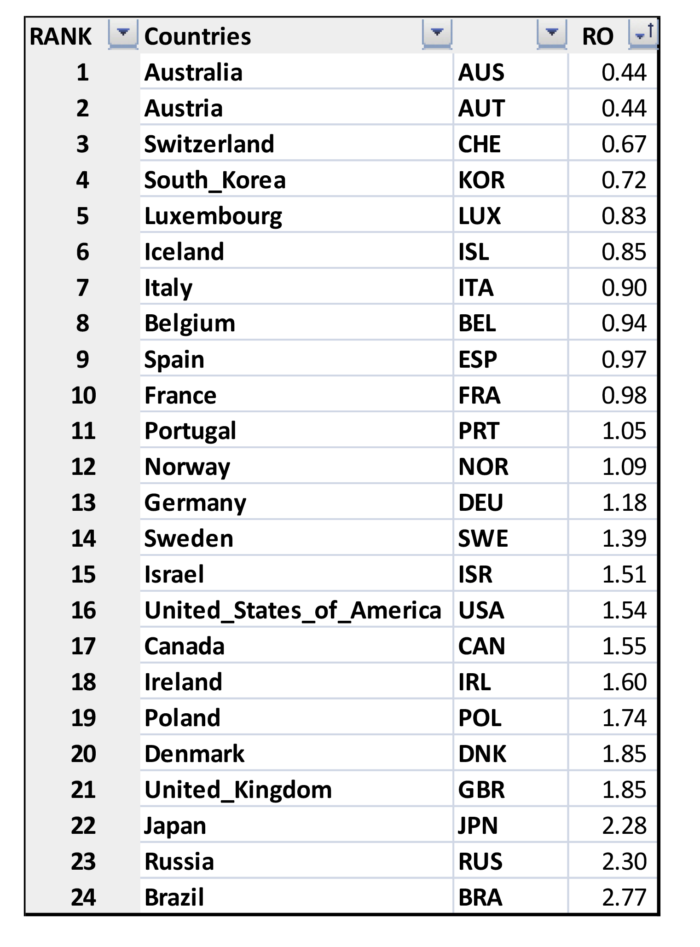 The existence of these problems / doubts that I have exposed to you have led me to develop a theory, and I emphasize only a theory, which in fact goes in the direction of what experts and scientists are starting to support.

There is, in fact, an Imperial College report that says that 10% of Italians (6 million) have already contracted the virus … and this was said 10 days ago!

Prof. Walter Ricciardi of the WHO and adviser to the Ministry of Health in Italy argued a few days ago that the spread of the virus in Italy had already reached 10% -20%.

In fact, I realized that we have a very limited picture of the behavior of the virus, since we observed only that 0.1% of the population that had symptoms, almost completely neglecting the other 99.9%, in which, by now it is certain, there is a large part of asymptomatics (a very recent Chinese study speaks of at least 4 out of 5).

So I asked myself: what if the more subtle feature of this virus, represented by its very long incubation period (14 days), was actually even worse?

In fact, today the first infection in China is thought to have occurred in mid-November 2019, in Italy since January, as well as in Germany …

But if this had been the case, given the very high Ro that I highlighted existed at the beginning of a COVID-19 epidemic (equal to at least 30, up to even 300), we would have had to have suffered an explosion of cases after a couple of weeks. Instead, much more time has passed to get the first official cases. This would therefore be consistent with the fact that:

In short, considering the rate of spread of this epidemic, I would not be surprised if the level of contagion in Italy was actually greater than 50%, given that we may already have been infected, not once, but 10 times. Which makes me think that people with weaker immune systems have already largely emerged, while most of the population has already developed immunity or, having very strong immune systems will be asymptomatic (possibly need to be subjected to a greater viral load to develop symptoms).

This thesis would seem consistent with some other studies conducted both on a micro scale (see cruise ship Diamond Princess) and macro (the latest data from Italy), in which day after day:

In short, we could actually be not far from what is called HERD IMMUNITY and these considerations may not be sterile and without consequences to face the present situation and, above all, the post-coronavirus.

I HOPE, THEREFORE, TO HAVE OPENED THE DEBATE AND THAT YOU ALSO MAKE ME HAVE YOUR OPINION, WITHOUT FEAR OF CRITICATING ME OR HIGHLIGHTING ME WHERE MY REASONING COULD BE WRONG.

For those who resisted reading this study of mine to the end, I want to give a small reward. Out of your curiosity, I report the ranking of countries that could be the first to emerge from the epidemic crisis, considering the following 3 factors in a balanced way: 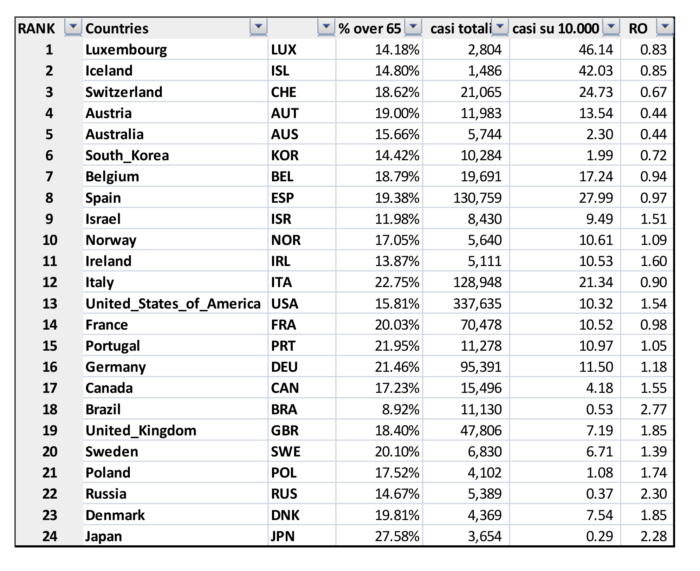 In the next Corona Letter we will analyze better what could be the scenarios for phase 2 of, hopefully next, post-coronavirus.

Keep on writing to me and asking me questions, and if you think my analyzes and comments are useful, don’t hesitate to share them with your friends and colleagues. To do this, use also the share button on LINKEDIN: